The Balloon Society of Kentucky

Ballooning in our Region – A brief history

The earliest record we have of a balloon flight in Kentucky comes from the August 16, 1837 issue of THE FRANKFORT COMMONWEALTH, which reports on the exploits of Mr. Richard Clayton, the first human to look down on Kentucky and southern Indiana from the air.

Clayton was an English born Cincinnati clockmaker, silversmith, and budding aeronaut. He had ten successful flights in his logbook when he brought his balloon to Louisville for the first time. On July 31, 1837 he made his inaugural flight from the city in his hydrogen filled, silk covered “Star of the West”. He later described to local media the view he had shortly after take off.

“My situation now was truly delightful, I could sit at ease and view the city and it’s thousands of inhabitants who were collected in groups in streets and on the tops of buildings. I could see the ferry boat and other steamboats puffing along, and I could clearly see and hear the Falls of the Ohio River”.

After an intermediate landing for lunch at Cane Run, Ky, Clayton made a final landing near Cox’s Creek in Nelson County. This first time flight started an era of balloon mania in pre-Civil War Louisville. By 1840 a balloon amphitheater was operating at the corner of First and Walnut Streets downtown. For 50 cents patrons could be treated to daring feats of aerostatic wonder. The first visit to Kentucky by a modern hot-air balloon was apparently the summer of 1971. While filming a television special “The Great American Balloon Adventure”, New Jersey balloonist Bob Waligunda spent several days filming near the Mississippi River in western Kentucky. The hour long program documented Waligunda’s cross-country balloon trip. He returned to the state the following year on tour with the Lark cigarettes balloon, and was summoned back in early 1973 to help plan what would become the catalyst for the explosive growth of ballooning in our area, The Kentucky Derby Festival Great Balloon Race.

That first race was made up of 11 balloons, all from other states since there were no local balloons at that time. They launched from the Iroquois Park parking lot new New Cut Rd. and landed south of Okolona. The race did not go all that smoothly however, one balloon ended up in power lines with serious damage ( no injuries ) and a stampede at a farm on Preston Hwy. killed one calf. Despite the negative press, this event gave several of us our first look at an activity that would change our lives forever. In the next year at least five new balloons were delivered to Louisville. The first one being “Udder Delight” a Raven delivered to Mike Ehrler in October 1973. Ehrler became the first balloon pilot licensed in Kentucky, and won the Derby Festival race the following year. John Freeman, Bill Bellis, Eddie Wheeler, and Jim Davis all bought new balloons that year. Balloon mania had struck again in our area. Through the seventies hot air ballooning continued to grow steadily in the Louisville area. In 1974 the state produced the U.S. National Champion, Chuck Ehrler. In 1976 the Balloon Society of Kentucky was formed, as reported by the Louisville Times on December 14, 1976: 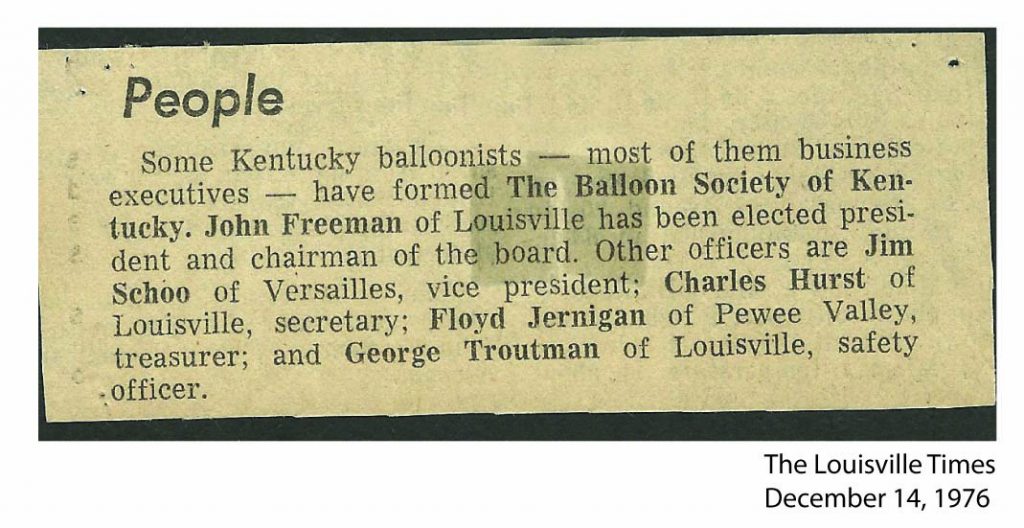 “Some Kentucky balloonists, most of them business executives, have formed the Balloon Society of Kentucky. John Freeman of Louisville has been elected president and chairman of the board. Other officers are Jim Schoo of Versailles, vice president; Charles Hurst of Louisville, secretary; Floyd Jernigan of Pewee Valley, treasurer; and George Troutman of Louisville, safety officer”.

As the popularity increased in the seventies, so did the number of local balloon events. Some of the cities that established balloon races as part of civic festivals and celebrations were: Madison, In; Elizabethtown, Ky; Owensboro, Ky; Lexington, Ky; Frankfort, Ky; Albany, Ky; Jeffersonville, In; New Albany, In; Jeffersontown, Ky; among others. The ready access to dozens of local balloons, many of them commerical, made it easy for event planners to add such a colorful and exciting event. This proliferation also helped spread the appeal of the sport to every nook and cranny of the region. It was during this time that the University of Louisville’s Shelby Campus became Louisville’s unofficial “Balloon Port”. Regardless of who built your balloon, who taught you to fly, or who you had service your balloon, Shelby Campus was the place to meet. It was somehow neutral ground and everyone felt welcome. Friendships were made and ballooning became a social activity. You could always find someone there to fly along with, chase for, or just ride along and watch. Visiting balloonists were all envious that their hometowns didn’t have such a place. The public soon learned that Shelby Campus was the place to see balloons. Every nice afternoon during ballooning season one could see at least a half dozen balloons on a regular basis. This consistency was very important to the sport. But all good things must come to an end, in September of 1987 the University of Louisville declared Shelby Campus off limits to balloons due to liability concerns among other reasons. 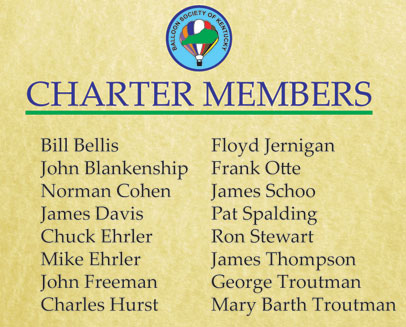 In February 1990, a landowner dispute between a visiting balloonist and an eastern Kentucky farmer led to the introduction of House Bill 694 in the Kentucky Legislature. It contained changes in the law that, if passed, would have ultimately meant an end of ballooning in the state. By the time resident balloonists were apprised of the matter, the bill had progressed at a frightening rate and was well on its’ way to becoming law. Under the direction of then B.S.O.K. president Kathy Thompson, a concerted effort was made by the unified group to make the legislators aware of the opposition to the bill. With only days to spare, B.S.O.K. members went into action making phone calls, writing letters, and contracting influential friends. In the face of all the opposition, the bill thankfully died in committee. This effort helped to further strengthen the bonds among club members and reminded us of the importance of a strong society.

The 1990’s brought several other notable distinctions to the area’s ballooning community. The title of U.S. National Balloon Champion returned our club when members Brian Beazly and Nick Donner both won the title during this decade, becoming the second and third B.S.O.K. members to do so. Also in the 90’s B.S.O.K. member Dan Hoehler was awarded what remains the largest ballooning prize ever, a new house in Albuquerque, NM (Dan was flying the special shape Energizer Bunny balloon at the time). The end of the decade saw a new major balloon event in Louisville, the Adam Matthews Balloon Festival held annually at historic Bowman Field. And the tradition of the Kentucky Derby Festival Balloon Race continues, with this event celebrating a 30 year anniversary in 2002.

As the Balloon Society of Kentucky celebrated its recent golden anniversary, the membership of the club is strong and increasing each new year. The club’s membership reached the 150+ mark in 2004, with 71 of those members being licensed pilots, plus over 10 student pilots. Literally a new generation of members are taking the helm. A recent count showed over ten sons and daughters of balloon pilot members have learned to fly from their parents, passing on a new family tradition.

Visiting pilots will find flying in our area is a pleasant experience. The Balloon Society has a strong landowner relations program, and few landowner complaints. Please contact any member for information about PZ’s, launch and landing sites, and local flying customs.

HISTORIAN’S NOTE: The facts and dates in the preceding are recorded to the best of my ability and resources. I regret any errors or omissions.